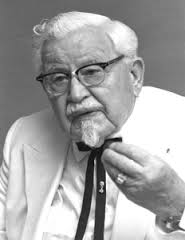 At the age of 65, Sanders was left with nothing but a Social Security check and a secret recipe for fried chicken.

In 1955, confident of the quality of his fried chicken, the Colonel devoted himself to developing his chicken franchising business. Less than 10 years later, Sanders had more than 600 KFC franchises in the U.S. and Canada, and in 1964 he sold his interest in the U.S. company for $2 million to a group of investors including John Y. Brown Jr. (who later became governor of Kentucky).

I love the story; the grilled version of the glory ain’t so bad either.

Before us we have one of the reasons so many people have no excuse. We also have another great reason why people still risk their lives to come to the USA.

I think what hinders us is the enemy of control. Changing from certain degrees of this kind of thinking will help us from wanting to give up when things don’t happen according to our desired time and/or desired way.  If we’re not careful we’ll make control a type of god.  Control acts as a god that cruelly judges one’s life and keeps one imprisoned by shoulda-coulda-woulda.  In this head-space, one does not proceed through life with delightful expectation or passion.  I’m gonna have to re-visit that another time.

Anyway, as oppose to trying to control the unknown, maximize every here and now.  In other words, RE-INVENT you.  From the look of things, Colonel Sanders wanted success early–not intending on finally “making it big” at the age 65; nonetheless, he did.  What do I mean?

He was a sixth-grade dropout, a farmhand, an army mule-tender, a locomotive fireman, a railroad worker, an aspiring lawyer, an insurance salesman, a ferryboat entrepreneur, a tire salesman, an amateur obstetrician, an (unsuccessful) political candidate, a gas station operator, a motel operator and finally, a restaurateur.

This man re-invented himself, continuing to move forward.  Why? You never stop.  You never quit.  Things don’t always workout but that’s the spice of life.  You may never have started your successful business had you not been laid off or fired.  You may have never rediscovered who you are, if you did not get divorced.  We can’t control every aspect of our lives, for instance – we can’t necessarily stop a bird from flying over our head but we can certainly stop it from landing or making a nest.

If I had the chance to dig into is his apparent never give up mindset, which led to the re-invention of himself, life would be enhanced.  Where did he get the determination from, the perseverance?  Though I would love to sit and pick his brain in person, I guess I’m just going to take what I know to gather the possibility of what I would find out if face-to-face with him.  Looking at his resume, he had some tough jobs.  One job title is repetitive – Salesman.

I heard a gentleman say this:

Salesman need to be tough-skinned.  They have to face rejection, whether it’s a kind or rude version, and keep a smile on their face.  There’s the thought that the odds are stacked against them, but the craziness to defy those odds.  Many successful business today were built on the sticktuitiveness of salesmen who realized that when life gives you lemons, make a meal with some lemonade and chicken and make it finger lickin’ good.

You can choose any person from history to teach you any topic you want. Who’s your teacher, and what do they teach you?

Parents are People Too

From one crazy life to another

Enjoying another walk today. While I’m walking, I come toward a hill.  I think to run/jog it and then I think of my knee that’s ace bandaged at the moment. To say I’m apprehensive is right.  There’s the EIK! moment; the uh-uh moment; and the What If moment.  Now the knee isn’t nor ever was broken but it’s been swollen, and the doctor suggested wrapping it, among other things. So a light jog should be fine, in my opinion.  But as always there is more for you to see here.

I began thinking of the relationship (be it small, almost non-existent, for some) that we have with our finances/money. We’re afraid to move forward because of current insufficiency.  We’re afraid to take a chance because of the possibility of something bad happening.  We cower from prosperous opportunities that are not overlaid in gold or adorned in gems.  Moving forward may be a bit painful, but in fact the old saying – No Pain, No Gain – still applies.  Don’t be imprisoned by fear, pain, anxiety, criticism, past, present,…Nothing.

Apply pressure and know that you were built to stand.  So what you’ve buckled before-made bad decisions and more-

Be strengthened in education

Be strengthened with time

Be strengthened in knowing, you’re not alone

Be strengthened for pursuing what may not be now but certainly may be in tomorrow.

Bankruptcy is not the end and for others of you it doesn’t have to be a beginning.

Your ‘being careful/cautious’ is really procrastination – tell the truth

We don’t encourage being gullible, so be informed – still look before you leap.

Did I jog? Yes. Was there pain? Yes. Did I stop? Kinda – stopped jogging but kept walking.  Oh yeah!  I just thought about people who complain about taxes.  Some do overtime to make more but then get angry about the taxes as a result.  Okay, so there are taxes, but are you also one of those sets of people who has their OT going toward their pension? Gain.  There’s also a biz/tax tip that I’ve learned from many where you make taxes work for you.  You can make all your money work for you.

Did I jog again? Yes. Was there pain again? Yes. Did I have to stop again? Kinda again.  Could I have pushed through it? Yep, if Jillian Michaels or Duvet or somebody was pushing me.  Sometimes having the right person pushing you helps in a pursuit.  For those that work out with weights, we know that our spotters are not just there if we need help but also to challenge us. Is it possible that maybe you do better with someone than on your own?  Well, do that.  That requires homework too, because some people are not in it for you but for themselves.  Still no reason to not pursue.

Hang with me and mine